Brooklyn has long been a magnet for writers and artists. The hip ones, anyway, and recently, certain grumpy and misanthropic British ones. And it’s fast becoming the go-to destination for photography in New York. Barely five weeks after the New York Photo Festival comes Photoville, a funky pop-up village of photo galleries housed in shipping containers along the Brooklyn waterfront between Dumbo and Atlantic Avenue. Photoville opened last weekend and continues through July 1. There are talks, hands-on workshops and a beer garden. There’s even a dog run. 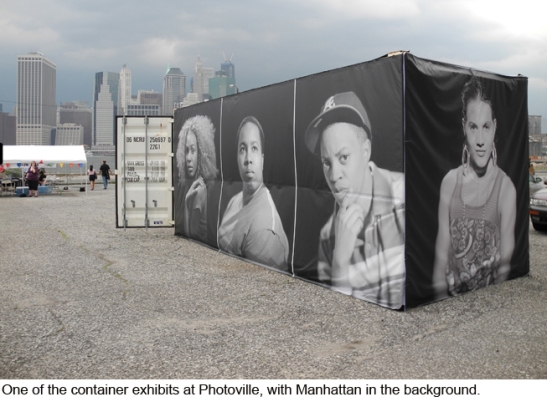 I made three outings to Photoville last weekend, and I have to say I loved pretty much everything about it, except the time it took me to get there (but that’s my fault for living on the un-hip Upper West Side).

Most of all, I loved the low-key, welcoming vibe. I have to say that I often find the gallery world offputting, a hermetically-sealed environment that rewards obfuscation and elitism. By contrast, it was refreshing to wander through a series of inventive container exhibits on a beautiful summer day, with laughter coming from the nearby beer garden. People were wandering in and out of the container village, coming in from the footpath, wanting to know what was going on. You could bring your dog, your child, your rollerblades. It was, as the kids say, all good. 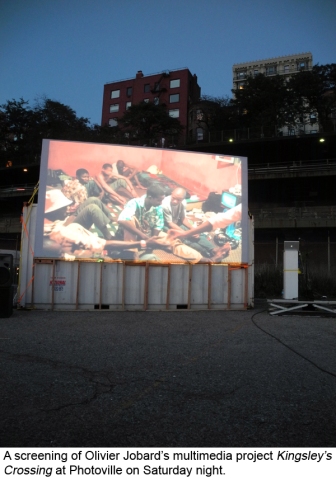 Like this year’s New York Photo Festival, Photoville has a heavy emphasis on photojournalism and documentary photography. I’ve said before that I think the recession is causing a new appreciation for this kind of work in the fine art world. Photoville confirmed this impression: there was hard-hitting work on prisoners, foreclosure, migrant workers, tent-dwellers and gangs. Some of it fell on the gritty side, some was more artful. Conceptual work wasn’t completely absent, but it was rare.

I especially liked the way some of the exhibits used the container itself to create a unique installation. Photographer Josh Lehrer displayed his platinum portraits of homeless transgender teens on the outside as well as the inside of his container (see top image); Bruce Gilden‘s exhibit on foreclosure included broken furniture and a ‘for rent’ sign strewn outside.

Continuing the inventiveness, an exhibition on Chinese migrant workers by Sim Chi Yin included a makeshift bedroom set up in one corner, giving a sense of the cramped conditions of workers’ accommodations. And in a few containers, photographs were pasted onto the corrugated walls, showing an ability to literally go with the flow.

On the opening Friday afternoon, there was a note of drama when the grounds were evacuated due to an approaching hurricane. Suddenly, a sky that had been blue and clear turned to dark slate, with smoke-colored clouds hanging over Manhattan. “If you can’t get out, we can go in one of these containers and wait it out,” a volunteer said helpfully. Though the idea of spending a few hours in a metal box with strangers was intriguing, my friend Amy and I opted to run for it. On our dash back to the car, I stopped to snap this image of colorful containers against the darkening Manhattan skyline.

The next evening was one of those perfect New York experiences that should have been immortalized by Woody Allen. The husband and I had some dinner in Dumbo, then strolled along the waterfront. All along the 1,000-foot path leading to Photoville were large photographs printed on a waterproof banner, attached to a chain-link fence. This was The Fence, a selection of images submitted in response to an open call. The work was almost uniformly strong. I loved Gregg Segal‘s humorous series on Civil War reenactors and Melissa Cacciola‘s ‘War and Peace’ portraits of soldiers in and out of uniform. 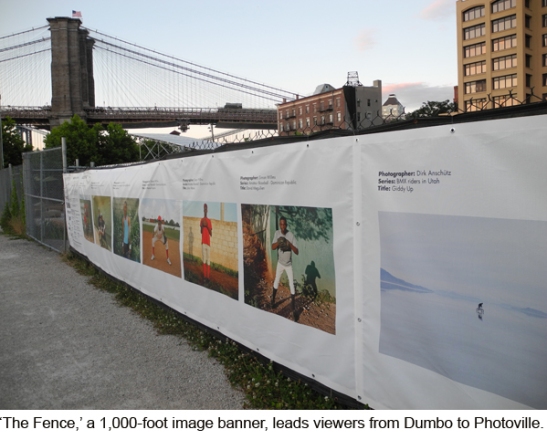 As the sun set, we watched a presentation by MediaStorm, the innovative Dumbo-based company that has turned so many great photography projects into compelling multimedia combinations of still and moving images. “When you humanize a story, it becomes more accessible,” said CEO Brian Storm, and the films proved his point. From Olivier Jobard’s 2006 Kingsley’s Crossing, about a young African man risking his life to get to Europe, to Phillip Toledano’s intensely personal A Shadow Remains (which sprang from his web site and book Days with my Father), the films were deeply moving. You can see them on the MediaStorm web site, but they were even more impressive when projected on a big screen with the sun setting over the brownstone buildings behind.

Multimedia storytelling is an area many photographers are moving into, and though it’s not quite clear where the revenue stream is, there’s no doubt that the narrative possibilities are exciting. “One of the things I love about multimedia is… I can now bring the voices of my subjects to my work,” said photojournalist Ed Kashi at the panel discussion The New Documentary on Sunday afternoon. Fellow panelist Jessica Dimmock ventured that she didn’t just want to make a documentary with bullet points and talking heads, but “a documentary that feels like a feature—this luscious, milky, weird, creamy thing.” You go, girl! Well, it will be interesting to see what she comes up with. (Check out the Mediastorm project of her breakthrough book, The Ninth Floor.)

There were a lot of things I didn’t get to do at Photoville, like take a lomography workshop, have my portrait made in tintype, or take a walking tour of Brooklyn with a Leica camera. I did, however, get to photograph and be photographed by André Feliciano, the wacky Brazilian artist whose greenhouse full of tiny camera-shaped “flowers” was a focal point at the center of the village. He scuttled off before I could ask him the obvious question (“Why?”) but I suspect I know what his answer would have been (“Why not?”).

In summary, it was all very different, stimulating and enjoyable. In Paris these days, there’s a phrase for something that’s especially cool, fun and innovative: Très Brooklyn. By that measure, Photoville lived up to its borough’s reputation.

For a schedule of the remaining events at Photoville, click here.

3 comments on “The Shipping News”

This entry was posted on June 27, 2012 by sarahjcoleman in Exhibitions, Uncategorized.