The Case of the Bad Olympic Portraits 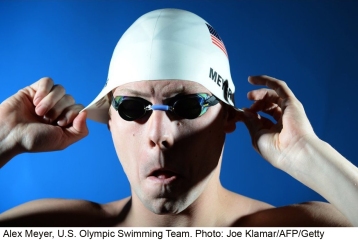 With the Olympics in full swing, patriotism is in the air and athletes are the media stars of the day. If they win medals, they become gods and goddesses. Theirs are the free gear, the product endorsements, the TV hagiographies, the first class this and that. Nothing is too good for a person who revives an entire country’s hopes and dreams.

That’s how it’s supposed to be, anyway. But something went wrong this year. Through various means, we found out that our athletes are—shock, horror—human beings! They may have wonderful stories of grit and triumph, but these haven’t made them bona fide superheroes. In some cases, they may even be jerks.

One of the first hints of this came with AFP chief photographer Joe Klamar’s portraits of the U.S. Olympic team, which are now on display at the powerHouse Arena in Brooklyn. The story behind these images is kind of cute. Back in May, Klamar went to the U.S. Olympics Media Summit in a Hilton Hotel in Dallas. The AFP had never attended the event before, and Klamar was expecting a press conference where he’d get to photograph athletes’ talking heads. He didn’t realize there would be an opportunity to set up a mini-studio and shoot portraits. So he scrambled at the last minute, using any materials that were handy. 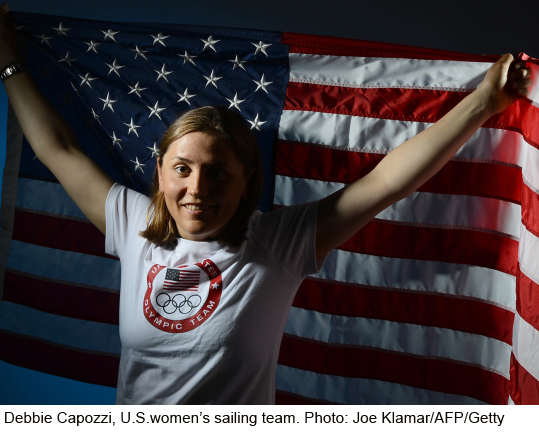 Whatever levels of truth are contained in this story (and one has an unfortunate tendency to doubt everything these days), Klamar’s shots certainly do him and the athletes no favors. They’re rough, provisional, often badly-lit and unsophisticated. Some of them look as if a sports fan shutterbug had crashed the event and impersonated a credentialed photographer.

But whether this constitutes an affront to the Olympics, American values and the world at large—as some have suggested—is another question. I would never argue that these are “good” photographs in any conventional sense. Some of them have that so-bad-it’s-good vibe—but I actually found it refreshing to see, as the Huffington Post put it, “a little rust on the press machine.” Standard imagery of athletes is relentlessly polished and predictable. Why do we need to believe our athletes are perfect? Isn’t it even more potent if they’re regular people with a few warts here and there, who’ve nevertheless succeeded through a combination of hard work and talent?

You could argue that there’s an analogy between these images and the work of a visual prankster like photographer Martin Parr. I think this is a faulty argument. I’m not a fan of Parr, a British photographer who has made a career out of exposing people’s foibles. And I think there’s a qualitative difference between his images and Klamar’s Olympic portraits. Parr stalks his subjects, capturing them unawares when they’re behaving in ways that reflect badly on them. Klamar’s Olympians, on the other hand, were fully complicit in the shoot. Can you say that this image of Olympian Tony Gunawan with a shuttlecock on his head is a bit silly? Yes, you can. But you can’t argue that he didn’t agree to be photographed this way.

“My last Olympics, I had a girlfriend—big mistake,” says world-record-holding swimmer and pretty boy Ryan Lochte, who has recently been exposed as a world-class jerk. “Now I’m single, so London should be really good. I’m excited.” 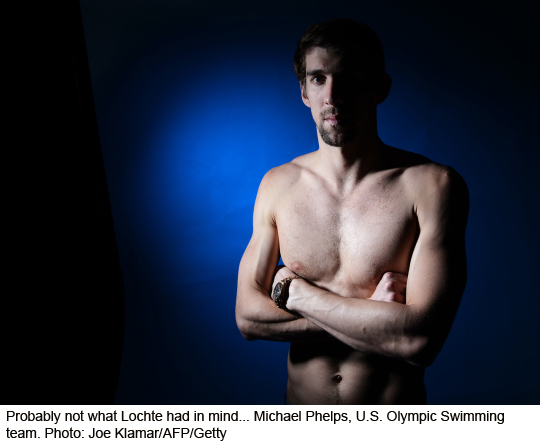 And while we’re on the subject of sex and dirty realism, I was reminded somehow of a scene in the novel Lady Chatterley’s Lover. I haven’t read that book since I was a teenager who somehow convinced her parents that D.H. Lawrence was suitable reading matter—but I’ve never forgotten this scene. In it, Connie Chatterley and her gardener Mellors are lying back after a vigorous session of adulterous sex, and Mellors is processing the fact that the remote, classy lady whose garden he’s been tending is someone he’s now servicing in a rather different way.

When I read that as a fifteen-year-old, it shocked and thrilled me to the core. I’d never read anything quite as earthy and adult before. It showed me it was possible to represent raw, undesirable reality in art, and that nobody was above having basic bodily functions. I pictured the Queen and Princess Di on the loo.

These days, of course, we get such crudeness shoved down our throats on a daily basis—in high art, pop culture and everything in between. It can be a bit much, and everyone has their own personal tolerance level. For me, though, Joe Klamar’s images don’t cross the line. They seem dorky rather than malicious, and therein lies a huge difference. But I’d like to know what you think! Please discuss below!

Anyways, all of this is somewhat apropos as I’m heading to the ancestral home of London next week. I’ll miss the Olympics by a day or so, but will enjoy reporting back on photo-literary happenings in my hometown. Until then… enjoy the women’s boxing finals!
——————————————-

Olympic Portraits by Joe Klamar is on display at the powerHouse Arena in Dumbo, Brooklyn through September 4th, 2012. For hours, click here.

3 comments on “The Case of the Bad Olympic Portraits”

This entry was posted on August 8, 2012 by sarahjcoleman in Uncategorized.