Weathering the Storm: An Interview with Jim Reed

As you may have heard, we had a bit of weather on the east coast of the U.S. last week. In New York City, Hurricane Sandy came in like a silent killer, sneaking quietly through the door and wreaking deadly havoc. There was minimal rain and only moderate winds, but within hours a massive and unprecedented storm surge had maimed low-lying parts of the city. And that was a picnic compared to what it did on the New Jersey coast.

I live on high ground on the Upper West Side of Manhattan, and from there we watched helplessly as friends in other areas suffered power cuts, flooding and worse. You’ve seen the footage so I won’t elaborate, except to say that as with 9/11, there was a spirit of cooperation and kindness that was heartening. Uptowners made space in small apartments to host downtown refugees; neighbors checked on the elderly and infirm. In the Harlem branch of Fairway, where I did my pre-storm shopping, lines were long but smiles were wide. It was a marked change from the cart-bumping, glaring behavior you often see there.

All of this reminded me of an interview I did four years ago with photographer Jim Reed, for a story in PDNedu. Based in Kansas, Jim is one of the country’s top documenters of extreme weather. Over the last twenty years, he has become known for capturing images that show both the destructive power of the elements and their astonishing beauty.

Jim is also a talented writer, having started his current career after selling a screenplay to Hollywood—a move that enabled him to buy the expensive gear he needed to document storms. He has written two books: Storm Chaser: A Photographer’s Journey and Hurricane Katrina Through the Eyes of Storm Chasers (with Mike Theiss). These days, in addition to photographing and writing, he spends time lecturing to different audiences about extreme weather.

In the wake of Sandy, I was curious to hear what Jim thought about our current and future climate, the media’s handling of the superstorm and the emotional and political fallout. I caught up with him over the weekend and we talked about all of this, in a fascinating and wide-ranging conversation that lasted over an hour.

Literate Lens: How has your work changed since we spoke four years ago?

Jim Reed: Since we talked last, the extreme weather events have become so frequent that it’s impossible for me to cover each one. Choosing where to go and pacing myself has become very important. When I don’t chase a storm, I always follow the coverage and try and learn what I can from it. With Hurricane Sandy, I made a decision to document it from afar. Instead of being out there photographing I was documenting it through television, radio, internet and social media, which provided me with a very different perspective.

LL: Were you surprised by Sandy’s ferocity?

JR: Not really. If you look at my notes, journals and photographs over the last two decades, you’ll see a very specific, factual pattern. There are now more storms and bigger storms that challenge our infrastructure. The consequences are more dire. So I thought something like this was coming, but I predicted it would come by next fall. It came a bit earlier than I expected. 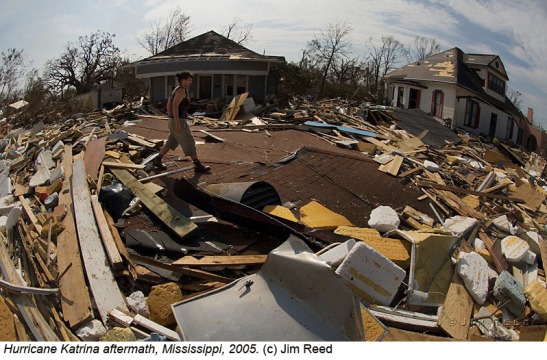 LL: If you, an educated observer, were able to predict this, why do you think officials on the east coast haven’t taken more precautions to protect their communities?

JR: I’m not a climatologist, but from what I’ve seen, first of all we’re dealing with a truly unpredictable, ever-changing subject, so the fact that we can predict it at all with any degree of accuracy is amazing to me. With weather patterns, the computers base their models on past systems, then average those with other information. But so much is changing so quickly in the weather that sometimes the computers get challenged. For example, hurricanes used to immediately weaken when they made landfall, but Irene didn’t do that and neither did Sandy. The computers are making the best guesses they can, but these are extraordinary times and if we’ve never seen something before, that might throw them off. And when you have the Jetstream moving and hurricanes going over warmer waters, there are going to be changes.

LL: What did you learn from monitoring the media on Sandy?

JR: First of all I was impressed by the forecasters at places like Accuweather and the Weather Channel. The computer models are getting better all the time, and they did an excellent job with this system. I was impressed that the national media started talking about the storm as soon as they did. And when it started, the New York Times had a blog with constant live updates, and they did a marvelous job. It was fascinating to watch bloggers in other countries write about it; this was truly a global story. 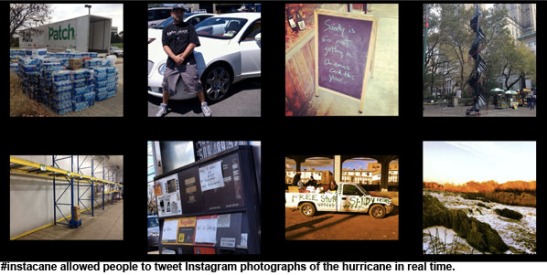 LL: I noticed that media channels were doing a lot of crowd-sourcing; asking viewers, listeners and readers to send in photos of how the storm affected their neighborhoods. How do you feel about citizens reporting on extreme weather?

JR: It’s a great question. Back in 1990s, when I went out storm chasing I’d pop in a tape to record the Weather Channel, and they would emphatically tell people not to go out and take pictures. Now they say just the opposite. Perhaps they’ll say, only take pictures if you can do it safely, but is the public qualified to know what’s safe? During Sandy, one woman came out to take a picture and stepped on a puddle of water that was on a live line, and not only was she electrocuted but her body caught fire. I mean, you’re not going to keep some people inside, the curiosity is too primal. But I wish we could have a campaign to help people become more weather literate, so they’d know when they were pushing it. You wouldn’t go to Africa and stand in front of a herd of stampeding elephants—but people will stand out in a hurricane, which is pretty analogous. And all they’re thinking is, how cool are those elephants?

LL: I read on your web site that you went to the White House in 2009 to talk to Chief White House Photographer Pete Souza about extreme weather photography. How did that come about and what did you discuss?

JR: Pete Souza heard I was giving a lecture at the Corcoran Gallery, and wanted to come but couldn’t. So he invited me to come to the White House and talk. He went to school in Kansas, so he knows what severe weather can be, and he has been with the President on storm aftermath tours. We talked about everything from cameras and methods of printing to climate change. I hope we’ll be talking more after the election! He’s got that weather bug, and with luck the Obama administration will have another four years to address this.

LL: Right, but at the same time, attention spans are so short and it seems hard for people to plan for more than their own generation’s future.

JR: It’s true. I’m perplexed by how quickly people seem to forget. But when you have major cities changed, when communities lose an entire zip code of houses and decades of memories are wiped out, it certainly leaves a visual impression. However, I’d like to come at this with an inspirational tone rather than by creating fear. We have a golden opportunity to address these issues now and make a historic difference.

LL: Visual documentation is clearly crucial. You’re known for taking breathtakingly beautiful images of weather systems, but you’ve also documented the devastation they bring. How does it feel to work with that dichotomy, and particularly to go into communities that have been wiped out?

JR: It’s very, very tough. That’s the one dark side of this adventure that I seldom talk about. Right after Katrina hit, we were there: we heard buildings collapse and people screaming for help for hours. I’ve experienced some post-traumatic stress disorder. At the same time it feels good to be there and help. Sometimes we’re the first responders: we’ve helped locate people, or get them out of harm’s way. I also go in to places two or three weeks after a storm: I have a project called 19 Days Later. At that point, the media has left, people are no longer in shock, and they have a different take on what’s happened. You can’t help but absorb part of their grief. It’s not a natural thing. Once you see it and feel it, it’s with you for life. 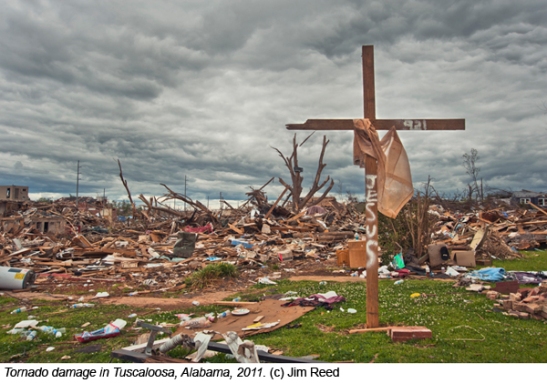 LL: What do you tell people in your lectures?

JR: One of the first things I try to teach is that we are in a new age of weather challenges. I talk to people about becoming more weather literate, learning what to do to minimize hazards and disruption. With a storm like Sandy, we need to ask, Can we make the subways watertight? Do the galleries in Chelsea want to be storing their artwork in basements? Is diesel, which throws off a lot of noxious fumes, the most reliable form of backup power in the future? I’m concerned too about outdoor concerts and stadium events. In the last year or two, several stages have collapsed during high wind events and have crushed people to death. There needs to be a movement to change how we do this, to put in more braces and safety systems. Regardless of what’s causing this increase in severe weather, we can begin adapting immediately.

LL: What are you working on now?

JR: I’ve been documenting what will go down as a billion dollar drought. It’s not the sexiest subject, but it’s going to be hugely important. I was inspired to do this because last Christmas, I went to Minnesota to spend the holidays with my girlfriend, and on Christmas day there the grass was still green. I thought that was pretty odd. Sure enough, 2012 began and the weather started heating up, and suddenly farmland was completely drying up in the Midwest. This is a big story: the land is so arid that crops have failed and farmers have even been selling off cattle because the cattle have nowhere to graze. It’s going to have a huge impact on the food prices in 2013.

LL: All of this seems so depressing. Do you have hope for the future?

JR: I do actually, and I have a lot more as a result of Hurricane Sandy. The reaction from officials and leaders has been inspiring. I was very pleased to hear [New York] Governor Cuomo come out and say he was convinced there was an increase in the frequency of storms. We have an opportunity now to increase momentum. If I can play a part, that’s great. I’d like my images to inspire people to talk about the weather. Because we have to be thinking: If the weather’s going to throw me a challenge every few months, what do I need to do?

See more of Jim’s images at his web site.

One comment on “Weathering the Storm: An Interview with Jim Reed”

This entry was posted on November 5, 2012 by sarahjcoleman in Interviews.