Aside from a few notorious individuals—Henry Ford, perhaps, or Bernie Madoff—few people get to experience life at society’s top and bottom. Chris Arnade is an exception. Two years ago, Arnade quit his job as a Wall Street trader to focus on a burgeoning hobby, photographing addicts and prostitutes in the Bronx neighborhood of Hunts Point. That’s where he spends most of his time now, following subjects into dirty pits under the expressway, or crashing for the night in a crack house.

Arnade doesn’t want this story to be about him, though. He’d far rather focus on the people he’s befriended and photographed—people like Takeesha, a prostitute who was raped when she was eleven, and Wayne, a homeless scrap metal collector and addict who, despite his troubles, is always polite and gracious. Men and women who, born into other circumstances, could perhaps have made a decent life for themselves.

“Poverty and addiction have a thousand mothers, none of them sloth,” Arnade wrote in a recent op-ed piece in the British newspaper The Guardian. As he’s eager to point out, nobody chooses a life of poverty and daily hustling—which, contrary to popular perception, “is some of the hardest work around.”

So no, the story isn’t about him. Still, Arnade knows, the “quitting Wall Street to photograph junkies” line is intriguing, so he’s not completely averse to using it to publicize his work. “It’s a bit of a cheap story, but I also know it’s a gimmick that gains attention.”

What becomes clear when you talk to Arnade is that he was never the stereotypical Wall Street guy. He grew up in the South, with a father whose Civil Rights campaigning resulted in taunts and death threats against the family. A socially awkward math prodigy, Arnade initially loved the intellectual challenge of being a money man. “I found my sense of accomplishment when I was doing numbers,” he says.

Things changed in 2008, when the recession hit and a shimmering curtain was lifted on Wall Street, revealing corruption and greed. Before, Arnade says, “I felt we weren’t doing a bad thing. We weren’t doing a good thing, per se, but it was benign.”

For several years before that, Arnade had been taking long walks around New York City on the weekend with his camera. One weekend, he got to Hunts Point—a desolate peninsula in the South Bronx, cut off from the rest of the city by an expressway and train tracks—and something coalesced. There he met people like Sonya, a former soccer mom turned heroin addict, and Michael (aka Shelley), who was disowned by his parents at fifteen for being gay. From those encounters, a sense of mission was born that has propelled him into a new career as photographer, writer and activist. On his flickr photostream and his tumblr site, Arnade publishes photographs and stories about a group of people he has come to think of as his friends; he has also been writing a series of searing op-eds for The Guardian.

Recently, Arnade spoke to The Literate Lens about the work, his subjects and his hopes for society.

Literate Lens: Were you in Hunts Point last night? It was SO cold.

Chris Arnade: Yes, and I’m in Hunts Point now. I spent the morning looking for a friend, I don’t know where she is, hopefully she’ll pop up. Usually she manages, but there’s always a risk she’ll pass out in the cold.

LL: That brings up the question of how involved you get with your subjects. You seem to get more involved than the average documentary photographer. How did you decide that, and is it hard?

CA: I’m lucky: if I was working for an institution I’d have guidelines, but I’m doing this work for myself. To me these people are my friends, and it’s no different from if you had a friend in need. The questions to consider are, how much influence do you think you have? Does the “help” you give actually help, or hurt? You can’t come in and tell someone they need to be saved: that’s massively presumptuous. If they ask for help I’ll help—I’ll give them a ride to detox or take them to McDonald’s and buy them dinner—but I’m not going to preach to them. The biggest thing I can do, as with any friend, is just listen, and see what that listening brings. 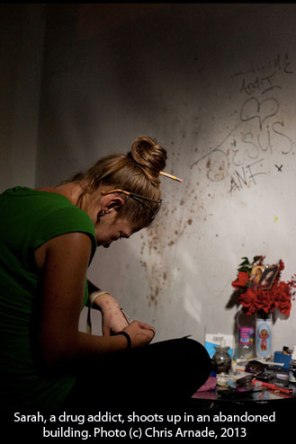 LL: How did this project get started?

CA: In 2010, I came to Hunts Point for the first time on one of my ‘Terminus walks’ — I’d ride to the end of a subway line and walk around the neighborhood. Someone had said to me, Don’t go to Hunts Point, so of course I had to go there!

LL: What made you keep going back?

CA: Hunts Point is surrounded on all sides by water, train tracks and expressway, so it feels isolated from the rest of New York City. I grew up in a small town, and Hunts Point has a similar feeling. As soon as I got here, I felt very comfortable. After some time walking around, I got involved with the nonprofit Hunts Point Alliance for Children, and started coming almost every weekend with the camera. I liked spending time in the quieter, more desolate parts, where the addicts live—so it was only a matter of time before I started talking to them.

LL: How do you approach and befriend your subjects?

CA: I treat them like people, not pariahs or children. One thing I do is hug everyone out here—there are times I’ve come home covered in filth! People here are used to getting a fist-bump, that’s their maximum human contact. I try to treat them the same way I’d treat anyone else. It may sound arrogant of me, as a former Wall Street trader, to call them friends—but I truly see them as friends. I slept over at Takeesha’s apartment during the blizzard, I wasn’t getting any pictures out of it, it was just where I wanted to be.

LL: What’s your photography background, and how has it influenced the work?

CA: I’ve used cameras all my life. As a kid, I used to build my own cameras, and as a PhD candidate in Physics, I built cameras in optics labs. But the fact that I have no art school training has benefitted me, I think. If I’d been to art school, I might have felt compelled to do something more complex with the work. I just want to take conventional pictures of unconventional people.

LL: Is it advocacy?

CA: At some level, yes. I’m a political person, opinionated, and that comes into the work. By accident or whatever, I’ve spent a lot of time between two very different populations, the top one percent and the bottom one percent. At first, that was playing out in real time—I was going to work on Wall Street during the day and coming here at night. I knew the two populations very well, and it was frustrating to me to see how they could exist ten miles from each other and be so different in terms of what they owned, yet not so different in terms of skill sets and qualities. I do get mad at times, so there’s a sense of activism. 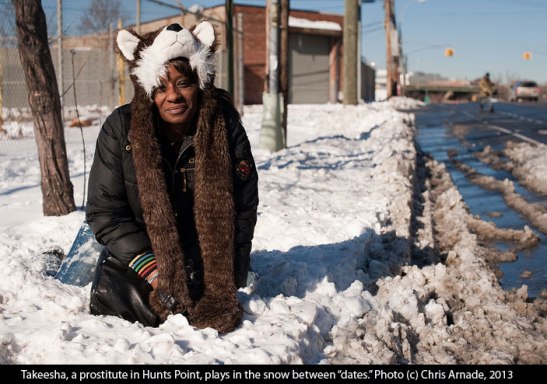 LL: A lot of notice you’ve gotten for this work has come from social media. What’s it been like to post these images and get immediate feedback?

LL: Along with the images, you post little vignettes of your subjects’ lives, which are really touching. You’ve also collaborated with other writers to tell some of these stories. What do the words add?

CA: A lot! The worst piece of advice I was ever given was from a famous professional photographer: he told me the pictures should be able to stand on their own without words. I totally disagree! There’s only so much a picture can do. Maybe if my project was about melting icebergs or people with tattoo fetishes I’d need words less, because pictures can do justice to icebergs and tattoos. But my goal is to get people to look at a picture and then be drawn into a story. The words challenge our narratives about the poor, which—if you’re one of society’s winners—might be that they deserve their lot, they’re lazy and need to work harder. As I see it, the real story is that winning and losing is based on circumstances, not merit. And that’s a harder truth to live with.

LL: You’ve also been writing your own op-eds for The Guardian, many of them about issues of poverty and its root causes. What do you hope to accomplish with those?

CA: Well, I hope my Guardian pieces have gotten a few people to change their minds about policy. Economists and policy-makers are often so obsessed with GDP and growth that they ignore everything else. I worked with economists for a long time, and what was often missing from the equation was empathy.

CA: That men suck. Seriously. Every single woman I work with out here has been raped by a man. They get abused and exploited on a daily basis. 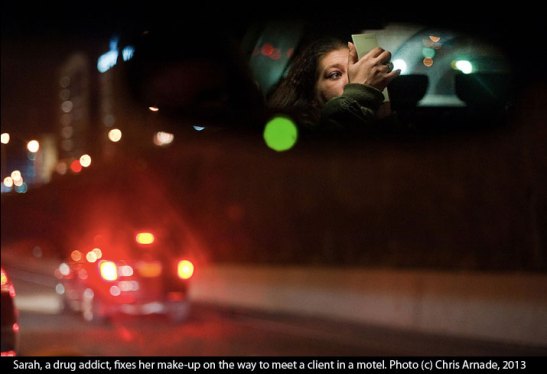 LL: You didn’t know this before?

CA: Not to the extent I know it now.

LL: So how does it make you feel, as a man, to know this?

CA: Sad. My father was a civil rights activist, and right before he died, one of the last things he said to me was, vote for Hillary. I said, not for Obama? And he said no, men have messed the world up for long enough. And these days I think that’s about right.

LL: How else has this work changed you?

CA: Eight or nine years ago, I was an empiricist and an atheist. I thought the best way to live was to weigh every decision and find the best answer based on all the evidence. Now I think that science is good at building bridges; it’s not so good at building lives. I’d rather live a life of complication and irrationality. I think that’s what being human is!

Listen to a story on Arnade on NPR’s Weekend Edition here.

78 comments on “Bronx Tales: An Interview with Chris Arnade”