Julia Margaret Cameron, the great Victorian photographer of lyrical portraits and illustrated legends, lived and worked on the U.K.’s Isle of Wight from 1860 to 1875. This is where she produced most of her iconic works (like Christabel, opposite), and also where she mingled with Victorian intellectuals such as Alfred Lord Tennyson, Charles Dodgson (a.k.a. Lewis Carroll), and Sir John Herschel. So when I was spending a week on the Isle of Wight recently, I naturally had to make the pilgrimage to Dimbola Lodge, Cameron’s former home, which has now been preserved as a small museum.

Dimbola is located in the small town of Freshwater, at the westernmost tip of the diamond-shaped island. It’s a stunning piece of countryside that has barely changed since Cameron’s day, with rolling green hillsides leading down to dramatic limestone cliffs and a seemingly endless expanse of cobalt sea.

Cameron first came to the Isle of Wight in 1855, when she visited Farringford House, the Freshwater home of poet Alfred Lord Tennyson. She fell in love with the location and in 1860, when her husband and son were away inspecting their tea plantations in what was then Ceylon (now Sri Lanka), she impulsively bought two adjoining cottages from a local sailor-carpenter: one to live in and the other to accommodate guests. (Dimbola is named for Dimbula, the family’s Ceylon plantation.) In 1870, she built a distinctive tower to connect the two houses and make the house look more imposing to visitors.

If the landscape was a major factor in Cameron’s decision to settle in Freshwater, having Tennyson as a neighbor sealed the deal (she even built a special back gate on her property for him). It’s hard to imagine this now, but Tennyson was a superstar of the Victorian age. He had been appointed Poet Laureate in 1850, after penning hits like The Lotos-Eaters and The Lady of Shalott, and had come to this remote location in 1853 to escape his celebrity. Even in Freshwater, though, he was often pestered by tourists, which compelled him to move again, to Sussex, in 1869.

Hester Fuller, granddaughter of novelist William Thackeray, once wrote: “Freshwater in the time of Tennyson has been compared to Athens in the time of Pericles, as being the place which all the famous men of the reign of Queen Victoria gravitated” (my emphasis). Novelist Virginia Woolf, whose mother Julia Prinsep Stephen was Cameron’s niece and one of her favorite models, wrote a comic play, Freshwater, based on some of the bohemian goings-on there (“There is a good reason why you’ve probably never heard of it,” writes theater blogger Lyn Gardner in The Guardian, “it’s pretty terrible.”)

Of course, it wasn’t just men who came to Freshwater. Perhaps offended by the sexism in Fuller’s quote above, a leaflet at Dimbola points out that, although many famous Victorian men flocked to the town, “it was a woman… who organised them, fed them, photographed them, flattered them, and proved perhaps the greatest artist of them all. Her name was Julia Margaret Cameron.” 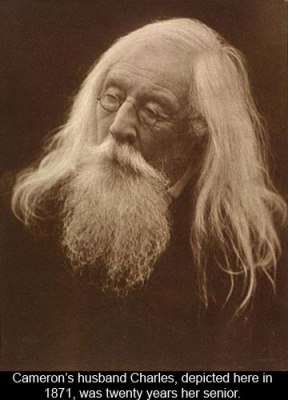 As this quote suggests, Cameron was a woman of great energy and imagination. I’ve written before about her life and work, and her feisty personality, so here’s a potted history: born in Calcutta in 1815, she was one of seven daughters of bureaucrat James Pattle and his French wife Adeline de l’Etang. Known for their vitality and wit, and also known as great beauties (aside from Julia), the Pattle sisters were educated in England and France, but spent time in India. It was there that, in the late 1830s, Julia met and married lawyer Charles Hay Cameron, a widower twenty years her senior.

Early in her marriage, Cameron found an outlet for her prodigious energy by acting as a society hostess, organizing functions for Lord Hardinge, the British Governor General in Calcutta. She also translated a German book length poem, Leonora. But it wasn’t until she was forty-eight that she took up photography, when her daughter Julia gave her a camera, thinking it would help keep her mother occupied.

Cameron struggled for a few years before producing a photograph she was proud of, a portrait of Annie Philpot, the niece of a friend of Tennyson’s. With one or two successes under her belt, though, she was off and running. Within a year, in addition to shooting her expressive portraits, she was taking pictures with biblical and allegorical themes. These efforts did not meet with immediate success. The photographic press disparaged her work as technically sloppy and artistically over-reaching. Although Cameron became beloved by the public during her life, she never did win over her critics or become financially successful as a photographer.

The nice thing about visiting Dimbola is that it gives a sense of the complete Cameron—hostess, wife, mother, neighbor, and artist/pioneer. As museums go, this one is rather old-fashioned and haphazard, which probably reflects the fact that it is run by a private foundation rather than the upscale National Trust or English Heritage. In fact, many people on the island did not initially see the point of preserving Dimbola, and it was only narrowly saved from being demolished, in the 1990s, by a group of ardent local supporters. Years later, strangely enough, Dimbola received a grant from Lydia and Charlton Heston (raising the intriguing question of whether Mr. Heston is clutching a gun in one of his “cold, dead hands,” and in the other, a photograph by Julia Margaret).

As far as the images on display go, the museum includes many of Cameron’s “greatest hits” along with some of her lesser known works–which are, in some cases, revelatory. I loved, for example, the section devoted to the images Cameron shot at the end of her life in Ceylon. These beautiful portraits of Ceylonese natives show that Cameron ‘s skills extended far beyond capturing images in the comfortable realm of her Freshwater set.

There is also a wonderful portrait of Cameron’s husband Charles (above), with his flowing white hair and beard, in which he is not playing the role of King Lear or Merlin (as Cameron often conscripted him to), but rather is lost in thought behind small round spectacles. He looks gentle and wise, and as much the dignified intellectual as any of the “power trio” of Darwin, Tennyson and Browning, whose portraits by Cameron adorn a nearby wall.

The most intimate part of the museum, however, is the restoration of Cameron’s bedroom, complete with William Morris wallpaper and a decorative wooden arch under which the photographer slept. Most importantly, the bedroom provided a high perch from which Cameron could look down onto the road to the beach and spy who was coming up the path, figuring out whether she wanted to run down and dragoon them into posing for her camera.

I can’t conclude this post without mentioning one of my favorite historical novels, Helen Humphrey’s Afterimage, loosely based on Cameron and inspired by the relationship between Cameron and her maid Mary Hillier, one of her favorite models. In the novel, Cameron becomes Isabelle Dashell and Hillier is Annie Phelan; Humphreys changes some details of Cameron’s biography but brilliantly conjures the spirit of a woman driven to challenge the conventions of her time. There are some wonderful scenes that take place in the studio of the great photographer, a former garden henhouse and greenhouse in which Isabelle struggles to overcome the mundane surroundings and create transcendent imagery. 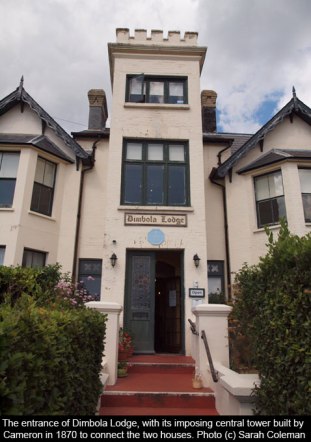 Unfortunately, the former gardens of Dimbola and real-life henhouse/greenhouse have now been built over. But in addition to visiting Dimbola, it’s possible to walk the “Tennyson Trail” at Freshwater and hike Tennyson Down (seeing the landscape and flora that inspired many of the great man’s poems), and even to stay in a holiday cottage or converted stable in the grounds of Farringford, Tennyson’s house. In 2016, Farringford will open as a museum and creative arts center, hosting writing retreats, workshops, concerts and exhibitions, which will vastly enhance the town as a cultural destination. But even now, one can get a sense of the brilliant gatherings that convened at Freshwater: the walks to the beach, the intense artistic endeavors, and the colorful evening dances and amateur theatricals arranged by the indefatigable Julia Margaret Cameron.

13 comments on “A Visit to Julia Margaret Cameron’s Dimbola”