A novelist and a photographer walk into a theater… 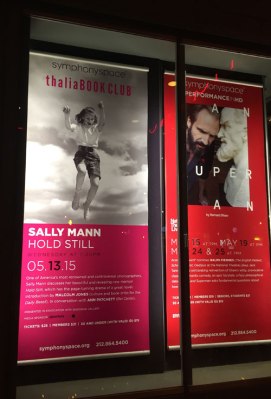 Over the three years I’ve been writing The Literate Lens, few events have screamed “blog post!” as loudly at me as the one I attended last night at Symphony Space, in which Sally Mann, the acclaimed photographer (who, by her own admission, rarely leaves her Virginia home), was in conversation with Nashville-based novelist Ann Patchett.

I’ve loved Mann’s work ever since she blazed into the headlines with her 1992 book Immediate Family—I’ve followed her since into some strange and dark territory, and knew, from the essay excerpt published in the New York Times Magazine a few weeks ago, that her new memoir Hold Still would be fascinating. I also loved Ann Patchett’s 2011 novel State of Wonder, which can roughly be described as a sort of contemporary feminist version of Conrad’s Heart of Darkness. A photographer-turned-memoirist in conversation with a novelist—needless to say, it was catnip to my visual-verbal brain.

What I didn’t expect, though, was that the event would be so laugh-out-loud funny. I’m not sure how well Mann and Patchett know each other, but they had a fantastic rapport on stage. From the beginning, there was a sort of Southern hospitality, let’s-not-take-ourselves-too-seriously feel to the evening, with Patchett proving herself a fearless and hilarious interviewer. From outing Mann as a hoarder (“the fact that you still have those six darling little dresses from your childhood—that just seems so weird to me,”) to her teasing dissatisfaction with one of Mann’s answers (“Do better,”) her questioning was zingy and probing in just the right way. I’ve been to so many events where, for one reason or another, an interview has fallen flat—so it was delightful to see one where both participants not only uncovered some golden nuggets but clearly had a great time.

Before I relate some highlights of the evening, though, I want to spend few paragraphs on Mann’s book. I’ve reflected before that only a lucky few people can express themselves well both visually and verbally, and with Hold Still, Mann has proven herself one of them. 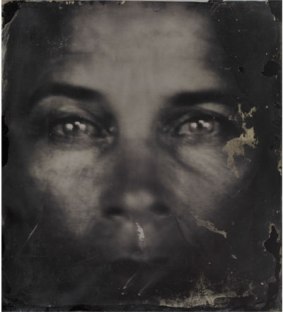 Of course, even if she wasn’t a very good writer, many of us would want to read her memoir anyway. Mann has had a fascinating life, partly because of her Southern gothic heritage, and certainly because of her role in the early 1990s as a lightning rod for the culture wars, when her intimate portraits of her children brought out every Puritanical bone in the American body politic.

You could recount this history chronologically, in mundane language, and it would still be interesting. But Mann goes much further. As in her images, the memoir is elegiac and probing, organized around revelatory themes, and full of rich stories that upend our expectations. Take, for example, this passage that opens a section in which Mann uses her relationship with her black nanny to examine the issue of race in the South:

“Down here, you can’t throw a dead cat without hitting an older, well-off white person raised by a black woman, and every damn one of them will earnestly insist that a reciprocal and equal form of love was exchanged between them. This reflects one side of the fundamental paradox of the South: that a white elite, determined to segregate the two races in public, based their stunningly intimate domestic arrangements on an erasure of that segregation in private. Could the feelings exchanged between two individuals so hypocritically divided ever have been honest, untainted by guilt or resentment?”

Bam: way to open a chapter. Though the observation isn’t particularly new (see Kathryn Stockett’s The Help—which I loved despite the backlash), it’s expressed with an appealing, punchy energy, pulsing underneath with confusion and a desire to get under the surface of this complicated territory.

That’s one thing. But then, take the line from the Prologue in which Mann describes a photograph as “cut from the continuum of being, a mere sliver, a slight, translucent paring from the fat life of time; elegiac, one-dimensional, immediately assuming the amber quality of nostalgia: an instantaneous memento mori.” That phrase “a slight, translucent paring from the fat life of time” took my breath away when I first read it. I’ve read a lot about photography, and have struggled to put its power into words myself, and there isn’t much verbiage about the medium you can throw at me now that doesn’t seem a bit stale and overused. But Mann’s description was utterly fresh and original. It’s a line that, like her best images, shimmers with an essential truth and just seems incredibly natural, despite all the work that must have gone into making it.

The book makes good use of images, too, using them to both comic and poignant effect. Here’s an example, in a chapter where Mann contrasts her parents’ laissez-faire rearing and her husband Larry’s buttoned-up and repressed youth: 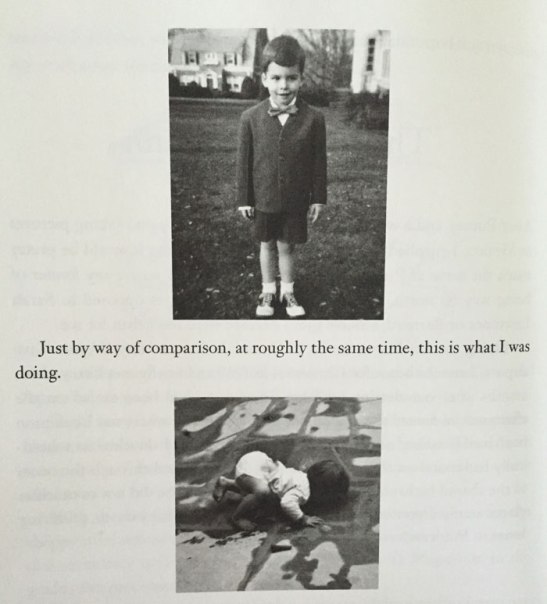 Can you judge a book by its cover? The image on the cover of Hold Still, of a girl in mid-air, perfectly illustrates the beautiful line I quoted above, that a photograph is “a mere sliver, a slight, translucent paring from the fat life of time.” Patchett, who began by asking Mann about the book’s cover, joked, “you always know an interview’s going to be really bad when it starts with the cover. It means the person hasn’t read the book.” However, she did ask, and this is what we learned: the girl is Sally Mann, who was on a trampoline at her brother’s boarding school graduation. It was shot by her father, a keen (and talented) amateur photographer. Some of the clouds were Photoshopped in order to make the image wrap around the book’s spine. (Later, when Mann quoted W. S. Merwin saying that an evanescent moment was “as unrepeatable as a cloud,” Patchett quipped, “You mean the clouds that were Photoshopped on your book cover?”)

Success is no guarantor of confidence. That’s right: one of America’s most celebrated living artists regards herself as a borderline imposter. “I pick up the camera and say, I’m going to make a terrible dodo of a picture, until maybe by chance, like a monkey with a typewriter, I’ll make a good one. But otherwise, it’s botch to botch,” Mann said. I was reminded of Franz Kafka’s constant feeling of failure, expressed in his diaries. Later, Mann did admit that, at sixty-four, she’s “beginning to feel the first little tendrils of confidence seeping in a bit.” That tension between self-doubt and confidence is interesting, I think, and crucial to the act of creation. Too much of either could clearly derail a career—but I’m glad Mann is letting up on herself a bit at this stage in her life.

You can take an image like this and still doubt yourself. Image (c) Sally Mann

How does photography compare with writing? Mann thinks photography is easier. “So much is given to you as a photographer,” she said—from subjects to light and mood. “As a writer, you have to create the choices you make. I can’t wait to go back to being a photographer!” Patchett, who writes both fiction and nonfiction, said that photography was more analogous with nonfiction in that the subject already exists, whereas in fiction, “you have to make up the trees.” However, she contested the idea that photography was easier than writing, saying, “I couldn’t begin to do what you do,” then deadpanning wistfully, “I do like the idea of going outside, though. That sounds nice.”

Let it go, already—Mann is sick of talking about Immediate Family. Of course, though, that’s what everyone wants her to talk about. She gently ragged on Terri Gross, who’d “asked me the same question in twenty different ways.” (I stand behind no one in my love for Terri Gross, but I have to admit, her interview with Mann was pretty one-note.) “I hadn’t anticipated how much everyone would want to talk about the family pictures, all these years later. It’s just seventy pages in a five hundred page book!” she protested. Patchett, known most for her prize-winning novel Bel Canto, said that feelings toward an iconic work can be complicated: “It’s your enemy but it’s your friend.” However, she sympathized with Mann’s frustration, saying of Bel Canto, “To me, it’s a dead thing. It’s like someone asking you about a boyfriend you had when you were fifteen. It’s gone.”

Great rewards come from hard work. Mann, who decided to write her memoir after being invited to give the prestigious Massey lectures at Harvard, and struggling over writing them, said the only way she could write her book was to “put on the harness every day and plod on like a peasant, seven days a week.” Conversely, she said, with photography there are images she labors over and others that seem to come as a gift from the blue. Patchett wondered if that was an illusion, saying, “For me, it comes really easily on the twenty-first day after I’ve spent twenty days sitting and tearing my hair out.” She also observed that she doesn’t see a big difference between seemingly-inspired and labored-over writing. “A lot of times I go back and look at it, and those lines that came from plodding, obdurate hard work—they’re really good,” she said. 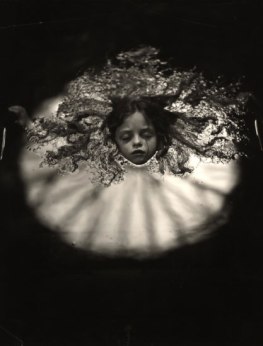 In portraiture, the photographer has a huge amount of control. In the Q&A, Mann was asked how she talks to her sitters and collaborates with them to get a photograph. She said it was a “deeply ethically complex process” and that “it’s no less complex when it’s your family.” She has largely avoided the process since shooting Immediate Family and Proud Flesh, the body of work she has done about her husband Larry’s body changing through muscular dystrophy. Recently, though, she said, she has been taking portraits of black Southern men in a continuing effort to look at race in the South. Her control over the outcome of these portraits is troubling to her. “I talk to people and say, look, I can make you look like an idiot by pressing this button,” she admitted. To temper this, she doesn’t let an image go out into the world without the sitter’s approval. “It’s important to me to let them do that.”

At this point, it would be remiss of me not to mention three novels inspired partly by Mann’s images. In Black & White by Dani Shapiro, the female protagonist is deeply scarred by her history as a model for her mother, a famous and aloof photographer whose images bear a striking resemblance to Mann’s. I found Shapiro’s treatment of her character’s trauma melodramatic (and, as I noted in a review for the San Francisco Chronicle, very different from what Mann’s daughters have expressed). More interesting to me was the Mann-inspired chapter of Whitney Otto’s Eight Girls Taking Pictures, in which Otto is loosely inspired by Mann but transposes her blood-soaked Southern history to the comparative lightness of California. Finally, though the famous photographer in Kathryn Harrison’s Exposure is a man, Harrison probes the ethical issues of portraiture quite effectively, and her character’s trauma seemed more appropriate given the sexual politics of the father-daughter relationship.

So that’s it, except to say that both Mann and Patchett seemed refreshingly unpretentious, down-to-earth, and—as expressed before—unexpectedly funny. If you happen to be in Nashville next Thursday, you can catch a reprise of the Sally and Ann show at Patchett’s wonderful bookstore Parnassus. For everyone else, I hope this post has opened a small window onto a memorable event, and has inspired you to dive into the great work of both Patchett and Mann.

Leave a Reply to Uy Do Cancel reply