Saul Leiter would have hated this article. Before reading a word of it, he would have deemed it “too much.” In the first essay in Saul Leiter, a new monograph that accompanies the Leiter retrospective currently at The Photographers Gallery in London, Leiter states his opinion that art should speak for itself and not be written about. He tells writer Adam Harrison Levy that he preferred his early years of obscurity to his late success, saying, “I embrace my own unimportance,” and, “I’m used to being left alone.”

That kind of indifference to success is refreshingly rare these days, and I’m sorry to flout the late Mr. Leiter’s tastes by writing about him. But the fact is, I love his work. When I visited London earlier this month, his retrospective was on the top of my list of photo exhibitions to see.

Leiter (who died in 2013) was an eccentric, the kind of person often referred to as a “character.” Born into an orthodox Jewish family (his father was a noted Talmud scholar), he was expected to become a rabbi, but instead rebelled and made art. He moved to New York in 1946 with the plan of becoming a painter, but was encouraged by a mentor to use a camera, and quickly took to it. Still, he approached photography with a painter’s eye, making loose, playful images that are imbued with unexpected lyricism.

Part of what makes Leiter’s photography so appealing is the many ways in which he broke with convention. His compositions are unexpected (no ‘rule of thirds’ for him), and he’s not afraid of blur and negative space. In the 1940s and 50s, when color photography was seen as artistically inferior, a medium for advertisers and hobbyists, he embraced it. He could find as much poetry in a snow-covered window as he could in a naked woman’s body.

Leiter’s color photography–which became celebrated only in 2006 with the publication of Saul Leiter: Early Color–is now widely held to be pioneering. (“Am I a pioneer?” he says in the trailer for In No Great Hurry: 13 Lessons in Life with Saul Leiter. “Maybe I am, maybe I’m not. I don’t mind one way or the other.”) I think this is because, even in the color work he did for fashion magazines in the 1950s and 60s, the focus is on form. He combined an exquisite sense of color with an acute eye for shape and composition, and the results are exhilarating.

Another theme in Leiter’s work is the use of some kind of filter, or obstruction—leafy branches, fabric, a misted-up window—between his lens and the subject. Often, this produces an image with distinct picture planes that add layers of complexity. Filmmaker Todd Haynes, who acknowledges Leiter as an influence, also points out that it reveals “the predicament of looking” and “stokes desire, because you want to get around [the obstacle].” (I wrote about this a few months ago in a post about Haynes’ film Carol.)  That seems right to me, but I also think that the planes and layers in Leiter’s images are sensually rewarding ends in themselves.

Saul Leiter: A Retrospective contains examples of all Leiter’s work, from his early black-and-white street photographs to his fashion photography, to a body of painted-over photographs of nudes (which are delicately lovely: as Levy writes, “there is nothing aggressive, prurient, or objectifying about them.”) Some of these bodies of work have been shown separately at the Howard Greenberg Gallery in New York, but it was good to see them all together. I only wish that the show could have been bigger: due to limited space at The Photographers Gallery, the exhibition sacrificed a certain amount of depth for breadth. 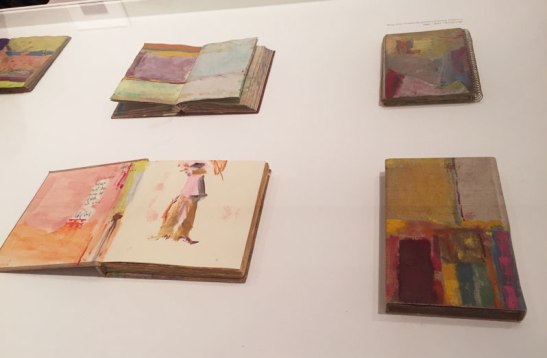 Luckily, the monograph provides more—and sometimes different—fodder for the Leiter fan. It was originally produced to accompany an exhibition of the same name at the Haus der Photographie in Hamburg, which seems to have been a bigger show. Included in the book are more of Leiter’s paintings, and a collection of un-painted-on black-and-white nudes. There are also more of his color photographs, including some intriguing ones of his partner Soames Bantry, a model-turned-artist.

The written content of the monograph is also an unexpected pleasure. To put it bluntly, essays that appear in exhibition catalogues can often be far from scintillating—in the worst cases, they can actually make an artist seem less interesting. But these essays are a delight. Probably because all of the writers were friendly with Leiter, and have channeled his intelligence and self-deprecating humor, they all have a wonderful directness and intimacy.

Leiter did not believe in overstating his significance. “I took some photographs, I painted a few pictures, some of them are nice,” he tells Levy wryly. For a more objective analysis, I’ll end with a quote from the essay by Leiter’s friend and curator Margit Erb, who muses, “Saul has taught me that life is full of happenings—small and poignant but miraculous happenings.” Yes, indeed. Luckily, he was there with his camera for some of them.

Saul Leiter obituary by Teju Cole in The New Yorker

A Casual Conversation with Saul Leiter, in Time.com

A Short Interview with Saul Leiter in American Suburb X

The Color of Genius: Saul Leiter on Faded & Blurred

10 comments on “Saul Leiter in London”